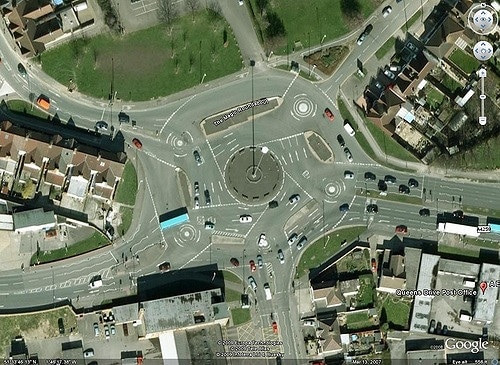 When you think of Swindon you generally think of a large town or a small City. And your first thoughts are about factories and office buildings due to Swindon’s industrial past with the railways. For 150 years Swindon has been the center for railway systems development. A fun fact, some of the railway works buildings have even being converted into commercial centers now occupied by local businesses.

Transportation is close to Swindon’s heart. It’s what put it on the map in combination of a perfect midway point between major UK cities. So it’s no wonder that Swindon is known for the engineering marvel that is the magic roundabout. And this is not to be confused with the European children’s show from the 1960s with the same name.

just imagine for a moment five small roundabout in close proximity to each other that are all inside a bigger roundabout that confuses the whole situation even more. And to add to the confusion those 6 roundabouts are actually housed inside the actual roundabout making there seven! The roundabout was opened in December of 1972 by the road research laboratory. 50 years on it is a testament to the common saying “give way”. If you don’t give away in this roundabout you’re going to have problems. And those problems are going to be more than just fender benders.

The magic roundabout is definitely a tourist attraction. Almost every daring tourist to come through Swindon likes to drive through the roundabout to try to make it out safely. How about the locals? The reaction of the locals when the roundabout opened we’re quite different. Somewhere quite amused all the way to others being extremely angry especially those who have to deal with driving bigger vehicles like lorries and trucks. Navigating a large vehicle through Swindon’s magic roundabout can be very challenging.

We Move and Clean company drivers have to navigate the roundabout on a daily basis. So while some might not be happy the more you have to drive through the roundabout the more it becomes a norm and you just see it as a normal roundabout in Swindon.

Something pretty interesting to note about Swindon’s magic roundabout is that in 25 years there have only been 14 serious accidents recorded. And about 100 minor accidents. That is statistically a lot lower than what is expected for such a complex junction.

Most of the accidents are to do with cyclists or motorcycles. After it became obvious this was happening a cyclist line was introduced on the outside of the roundabout. If you want to read more about the magic roundabout you can read an article SwindonWeb did.

Below is a short video you can watch if you want to understand how the magic roundabout actually functions. It’s actually quite interesting and navigating the roundabout flawlessly almost makes you an amateur engineer yourself.

Hopefully you enjoyed our quick recap of one of Swindon’s well known landmarks. if you visit Swindon and you decide to take on the challenge of the magic roundabout stay safe. And if you are a local in Swindon then also stay safe!

If you need carpet cleaning in Swindon then we would be happy to provide a quote!